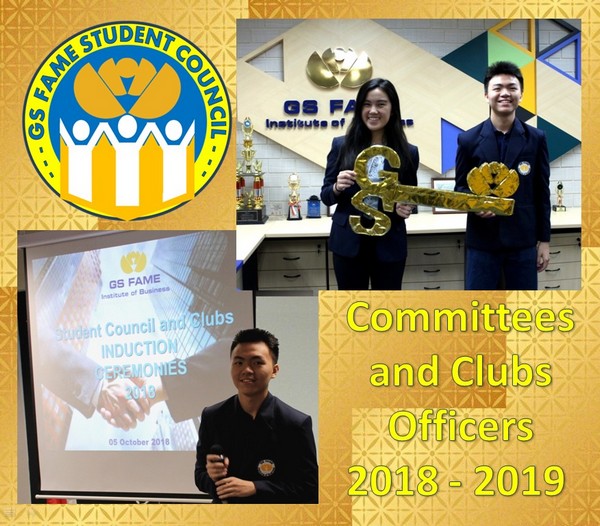 The Student Council of GS FAME Institute of Business held its induction and turnover ceremonies on Friday, October 5. The Student Council officers for the school year 2018-2019 headed by Richard Wang, the President, with his Vice President, Paul Vincent Leuterio were officially sworn into office by the institute’s Head of International Programs, Mr. Christopher T. Cura.

Richard rendered his inaugural speech with optimism and he emphasized the importance of teamwork and dedication in achieving the goals of the student council. He told the group that “size does not matter,” because he believed that although the GS FAME officers are few in numbers, everything would be possible if they will work together as a team to reach their goals.

Since Theresia, the outgoing President of the Student Council, was in Bali at the time of the Induction Ceremony, a prerecorded video of the turnover was shown to everyone, wherein the former president passing on of the symbolical GS FAME Student Council key to the new president, Richard. A short video of Theresia’s farewell speech was also shown afterwards. In her speech, Theresia acknowledged the support of her officers and members. She also gave a meaningful advice to the new president and to his officers.

The newly inducted officers of the GS FAME Student Council are Charice Cruz Barcelon, Secretary; Evelin, Treasurer with Niesa Milegita as her assistant; Elisha Widjaja, head of the Social and PR Committee; Dhiren Ajit Kirpalani, head of Music Committee; Hiro Kevin, head of the Sports Committee; and Maya Dewi Milsi, head of the English and Book Club while Elsina Ayerita Siletty will serve as the chief editor of the GS FAME ‘Momento’ e-newsletter. The new officers of various student organizations also took their oath to office. The newly inducted club presidents were: Alvina Bernice Salim (Accounting and Finance Club); Charice Cruz Barcelon (Fellowship Group); and Jerry Lavesh Mahbubani (Management and Marketing Club). Certificates of recognition were awarded by Mr. Christopher T. Cura, who is also Head of Student Affairs, to the previous year’s student officers to acknowledge their efforts and services to the institute and to the GS FAME students.