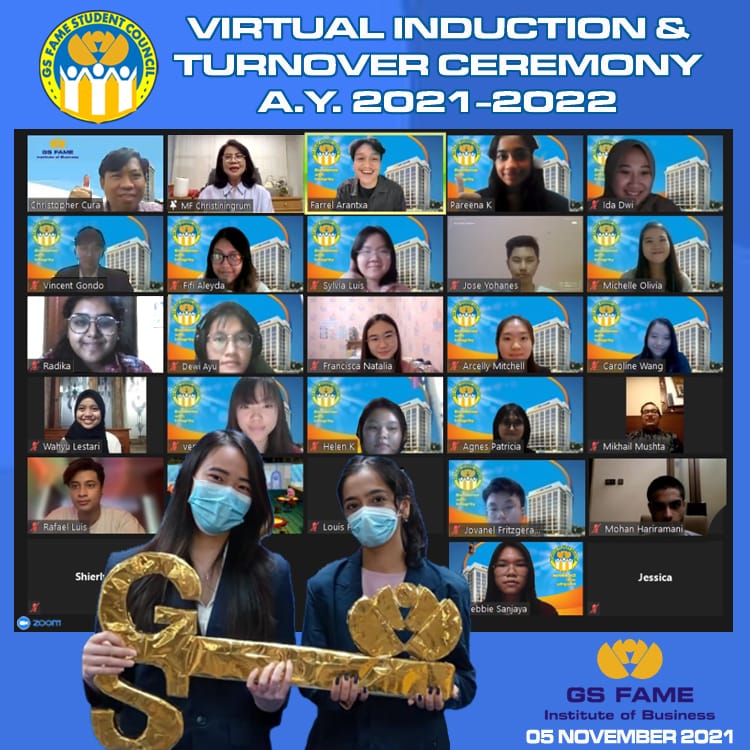 The new officers and members of the GS FAME Institute of Business Student Council and clubs were inducted into office last Friday, 05 November 2021. The GS FAME Student Council officers for academic year 2021-2022 under the leadership of Pareena Ashok Keswani, as President with Vincent Gondokusumo as her Vice President were officially sworn into office by the Head of International Programs, Mr. Christopher T. Cura. The IBN Rector, Dr. M. F. Christiningrum thanked and inspired the new set of officers and members through her opening remarks for the ceremony.

An online turnover ceremony was also conducted whereby the former president, Niesa Milegita through the passing on the symbolical GS FAME S. C. key to the new president, Pareena. Niesa rendered her farewell message expressing her gratitude to her officers for their support and encouraging the new set of officers to do their best. Pareena then rendered her inaugural speech encouraging her new set of officers to work together and she emphasized the importance of working together in achieving the goals of the student council.

Certificates of recognition were virtually awarded to the previous year’s student officers to acknowledge their efforts and services to the institute and to their fellow students.

Virtual Exchange Lecture at UP Baguio